Seoul is one of the biggest cities in the world, with a population of over 10 million people. Traffic jams are a major problem in the city, but with the systematic and advanced public transportation system you can quickly and easily get anywhere. Various bus routes and 19 subway lines connect every areas of the city and the surrounding regions. The most efficient and fastest way to get around is by subway and although buses might seem a bit complicated at first, with a little experience and understanding of the system, they are a very convenient way of transportation.

How to get to Nakseongdae Station

1. Take Gwanak 02 Bus (900won for a single ride by T-money or 1,000won without the card) at the Dormitory entrance stop, in front of bldg 906 or 925.
2. Get off the last station, called Nakseongdae station, You can reach the station after a short walk.

How to get to Seoul National University Station

Take bus 5513 at the Dormitory entrance stop (1,200won / 1,300won). This will take you directly to the subway station where you can transfer to subway line 2. Also, to come back to Gwanak Residence Halls from Seoul National University Station, take bus 5511.

How to get to other near subway stations

Bus 5516 from the Dormitory entrace is going to Noryangjin (Subway line 1) and Nodeul (Subway line 9) stations. In addition, bus 8507 from the main gate of the campus goes straight to Seoul National University Station subway line 2, Sadang Station subway line 2 and 4 and KTX Gwangmyeong Station. If you take the Campus Shuttle to the SNU Main Gate, there are several more buses that can take you to Seoul National University Station.

(Subway line 2) SNU station - Main entrance - Nok-doo
Get on the bus at Exit No. 3 of the subway line 2 SNU station. Although the bus stops at the SNU main entrance, it does not enter the campus.

SNU internal circulation- (subway line 2) SNU station
Get on the bus at Exit No. 3 of the SNU station After passing through the main entrance, the bus circles the school in the counterclockwise direction or to the student center direction. It passes by the School of Law, College of Natural Sciences, College of Agriculture and Life Sciences and lower College of Engineering.

T-money card is a rechargable card used for paying transportation fees in Seoul and several other cities in South Korea. It can be used for all means of public transportation in the city, including subways, buses and taxis. Public transportation fare is ₩100 cheaper if you use a T-money card and it can be used for transferring between subway lines and buses at a reduced fare. The price of the card is ₩2,500. You can buy and recharge it at convenience stores with the T-money logo (GS 25, CU, Mini Stop, Buy The Way, 7-Eleven, Story Way) and Ticket Vending and Card Reload Devices inside subway stations. If you don’t want to use your T-money card anymore, the remaining balance can be refunded at the selling locations with a ₩500 service fee. Some banks also issue credit/debit cards with a T-money function.

Single journey tickets for the subway cost between ₩1,250-3,650 depending on the distance. You can buy single-use transportation cards at the ticket machines at each subway stations. If you buy a single ticket, you will have to pay ₩500 deposit for the card, which will be refunded to you once arrive to your destination and return the card. Just look for the ‘Deposit Refund’ machines. It’s more beneficial to buy a T-money card, since it saves you ₩100 on each ride. Also, you will get discounts when transferring.

You can easily recharge your T-money card at convenience stores with the T-money logo (GS 25, CU, Mini Stop, Buy The Way, 7-Eleven, Story Way) and the Ticket Vending and Card Reload machines at subway stations. Just place your card on the designated place, click on the amount you want to deposit on your card and pay. The machines all have an English language option, as well as Chinese and Japanese.

If you have a T-money card, you can get discounts when transferring from subway to buses. This saves you a significant amount of money, since you have to pay for each ride separately if you don’t have a T-money card. Transfers can be made up to 4 times. To get a discount, don’t forget to place your card on the reader machine before getting off. The transfer must be made within 30 minutes after getting off the previous means of transportation. However, the transfer discount does not apply when getting on the same numbered bus you just got off. There is no transfer discount when transferring to a subway line after getting off the subway. If you pay attention to these simple rules, you can save a lot of money on your transportation fees.

Taxis are inexpensive and abundantly available all over Seoul. They are not only comfortable and convenient, but also safe to travel around the city day and night. You can easily catch a cab on the street or at the taxi stands. Empty cabs have the sign “빈차” (Bincha) lighted up in red in the front window. Most taxis in Seoul accept credit cards and T-money card for payment (look for the “card taxi” sign). An increasing number of taxi drivers speak at least a little bit of English but free interpretation service is also available for foreigners (look for the free interpretation sign). There are two types of taxis available: regular and deluxe (in Korean: Mobeom) taxis. Regular taxis are usually white, silver or orange in colour while deluxe taxis are black. Deluxe taxis are more spacious, offer a more comfortable way of travel and a higher standard of service, but they also come at a higher cost.

Tipping is not customary in Korea; you are not expected to give a tip to the cab driver.

SNU operates free shuttle bus services for the convenience of its members. There are four types: Off-Campus shuttle, On-Campus Circulation shuttle, Library shuttle and the shuttle for students with disabilities. Shuttle schedules are published through mySNU before each semester begins and can be found from SNU mobile app, too.

Off-campus shuttles connect Gwanak Campus with SNU subway station line #2 and Daehak-dong, a local area where a number of SNU students reside. These shuttles run from 7 am to 7 pm during weekdays, except for the 2nd Engineering Building-bound one which runs from 8 to 11 am only. This time schedule only applies during the regular semesters. For summer and winter break time, service time is limited to mostly daytime.

Another shuttle departing from SNU subway station line #2 goes to 2nd Engineering Building (upper Engineering, Bldg. 301 and 302). Its stop is located about 50m from exit #3 and stops at College of Agriculture and Life Sciences and College of Engineering (lower Engineering), too. This shuttle does not run in both directions, so if you want to go to the subway station from Bldg. 301 and 302, you have to take a local city bus or take the on-campus circulation shuttle and transfer to the off-campus shuttle from the Administration Building (Bldg. 60). 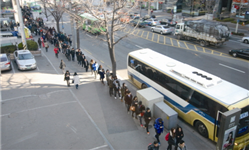 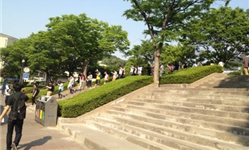 You can take the shuttle in front of the convenience store 7-ELEVEN (near Seoul Polytechnic School), which will drop you at the Administration Building (Bldg. 60) stop as well. Boarding the shuttle at bus stop 4-1 (the stop closer to Student Center (Bldg. 63) ) will take you back to the Daehak-dong stop. Off-campus shuttle buses run from 7:00AM to 6:30PM every Mon.-Fri. throughout the semester. Separate time schedules assigned for Summer/Winter Sessions are announced at those times.

The shuttle departs in front of China Dang near Inheon Elementary School’s main gate between 8:30 – 11:00 am but does not run during the Summer/Winter sessions. It will drop you at several stops near College of Engineering, including the Gwanak Residence Halls and 2nd Engineering Building (Bldg. 301 and 302).

The shuttle departs in front of TIRE BANK which is 350m from exit #4 of Sadang subway station. It runs between 8 – 11 am and drops you near the Administration Building (Bldg. 60 ).

On campus, you may choose to get around by on-campus circulation shuttle buses. Many students take this shuttle after arriving at the main gate by local bus or airplane limousine bus.

There are two on-campus routes: The main one is circulating the campus counterclockwise, following the boundary of it. This route includes 18 bus stops starting from the main gate of SNU and ending at the College of Business Administration (Bldg. 58 ). During the academic year, this shuttle bus runs from 8 am to 9 pm, while services may be limited during the Summer/Winter sessions. The interval is every 6 minutes (20 minutes interval between 7 – 9 pm).

For the opposite direction, clockwise shuttle runs every 20 – 60 minutes. This shuttle starts from the 2nd Engineering Building in the clockwise direction and when it reaches the Gwanak Residence Halls, it takes a short detour from the residence halls to Hoam Faculty House (near the rear gate) and goes to upper Engineering again.

Library shuttles take students who study until late night to either the subway station or Daehak-dong. You can take the bus right in front of the Administration Building (Bldg., 60) from 9:10 to 11:10 pm, every 30 minutes. The left one among two waiting lines heads for Daehak-dong and the bus on the right side goes to SNU subway station. Destinations of the library shuttle buses are the same as the off-campus shuttle buses that run during the daytime.

This shuttle is mainly for students who stay in the 2nd Engineering Building (Bldg. 301, 302) after the midnight. It runs from 0 – 2 am for every 30 minutes and departs from Bldg. 135, stopping at Bldg. 301, 302, 38 and College of Agriculture and Life Sciences, College of Natural Sciences, Main Gate, College of Business Administration, College of Veterinary Medicine, GSIS and Gwanak Residence Halls and takes you to Nakseongdae (near Inheon Elementary School) and SNU subway station (exit #3). This shuttle does not run during the Summer/Winter sessions.

Shuttle for Students with Disabilities

SNU provides special free shuttle buses for students with physical disabilities. These buses are equipped with wheelchair lifting devices and an assistant will accompany. The route will be decided every semester after considering the size of the user group and each individual’s destinations. In order to take advantage of this bus service, fill in the application form at the SNU Center for Students with Disabilities (Student Center, Bldg. 63, 1F ) before the semester starts. You can also schedule the shuttle bus for one-time use by contacting the center at +82-2-880-8787.

If you let us know who you are below, we can provide you with more accurate customized information